Estás leyendo: Spanish government and the european commission are questioned about olive oil plundered by the turks

Senators Carles Mulet García and Jordi Navarrete Pla, members of the Valencian political coalition Compromís, have presented two questions and a motion in the Spanish Senate in order to ask the Spanish Government to provide the last three reports of olive oil spanish imports issued by the Customs Department. Following the debate generated by the Turkish crimes in Afrin, the Valencian Senators want to know if, as reported by different media last year, the cooperative group DCOOP and Aceites Toledo were sanctioned for selling Tunisian oil as Spanish. The senators asked the Government of Spain to explain if any other company was involved in this kind of fraud and if, specifically, some other traded illegally with Turkish olive oil. If so, Mulet and Navarrete want to know how Spain is combating these fraudulent practices and what kind of sanctions are imposed on offenders. The Government of Spain has also been asked by the Basq Senator Jon Iñarritu (EH Bildu).

Compromís also demanded to be strengthened the customs police of the Mediterranean ports with enough resources and agentsin order to detect the origin of oils to be sold in Spain, and very especially, of those that have their origin in Turkey. The Valencian coalition urged the Government to adopt additional measures to protect local consumers that make it impossible to trade foreign productions that violate the European regulations.

Carles Mulet and Jordi Navarrete want to clarify if Spain, Italy or any other third-country could be involved in the fraud of imports of falsely ‘Turkish’ oil stolen in Syria, while recalling that Turkey benefits from trade agreements that simplify the marketing of their products. Senators believe that European police should coordinate in order to investigate “a practice that could be financing terrorism in the Middle East by using despicable practices of robbery, pillage, bribes, food manipulation and fraud”.

The Primavera Europea coalition – of which Compromís also forms part– also presented a motion to the European Commission for asking the authorities to implement the necessary means to know if any European company could be involved in the acquisition of Afrin stolen oil.

No tests to know the origin

On the other hand, none of the Spanish institutions that are responsible for ensuring compliance with European regulations in relation to agri-food imports have the necessary sensory and analytical evaluation technologies to determine the origin of an olive oil. What this means in practice is that only a police investigation that exceeds the powers and competences of the service that inspects imports -SOIVRE- would allow to find out if, as Público denounced a few days ago, Turkey could have introduced or be trying to fraudulently selling a portion of the ten to fifty thousand tons of olive oil looted to the Kurds in the Syrian city of Afrin and its surroundings in order to finance the Islamist mercenaries who are used to sustain the illegal war effort in that canton.

“Ask the Ministry [of Agriculture] to see if they have any carbon test to find out the origin of an oil,” a SOIVRE employee tells us over the phone. “Here we only practice the necessary analyzes to comply with the EU regulations, and among them, there is none to confirm their provenance in a reliable manner”. And indeed, it is. Both the organoleptic tasting panels and the chemical analyzes to which, in compliance with European law, the olive oil imports are subjected, allow to find out, among other things, if any type of adulteration has occurred, if it has been mixed with other kinds of oil or if it is of a lower quality than it presumes to be, but not other variables that help to prove its origin.

Working on a test

According to Rafael Pico, director of the private entity that groups the Spanish olive oil exporting companies (ASOLIVA), “it is not that the SOIVRE or the Customs department lack the means due to an inadequate endowment of resources. The problem is that there are not even scientific procedures to determine the variety of oil that goes in the bottle, much less if it is multivarietal oil. Precisely, the European Commission is working right now through the Oleum project in the development of some procedure to determine that and other issues. Maybe we’ll have something before five or six years. “

“One hundred percent of the imports that enter Spain are subject to double the tests required by European law. Both the SOIVRE and the customs offices perform organoleptic and physico-chemical tests to determine if they conform to the quality or to rule out that the oils have been adulterated. Regarding the certainty of the origin, the only guarantee is the traceability documents. Of course, if there has been some kind of falsification of credentials, the responsibility would be the Government of Turkey or the Turkish companies that took part in it, and not the Spanish companies that hypothetically could acquire without their knowledge any Syrian product with a certificate of Turkish origin,” says Rafael Pico.

According to the director of Asoliva, the last report released by the Customs Department – the one corresponding to the month of October – does not list any item imported from Turkey. “We will have to be alert to upcoming reports and ask Turkey to comply with the legislation.”

The traceability document that Rafael Pico mentions establishes all the way traveled by the olive oil from the tree to the table, and that includes its intermediate stations. Of course, if as recognized by the Turkish Minister of Agriculture Bekir Pakdemirli, the Afrin harvest has been looted to be sold fraudulently, no official document will send the product to trees located in an area illegally occupied by force of arms or leave to see that the oil was obtained by the Free Syrian Army (FSA) and its Turkish allies by the looting of the Kurdish producers, subjugated and dispossessed of their possessions by the Erdogan regime.

According to information published by Público on the 12th, the Government of Turkey is trying to introduce illegally in third countries such as Spain several thousand tons of olive oil produced with the olives plundered by their mercenaries in Afrin and other neighboring municipalities of Rojava. Part of the production could have already been sold, or about to be marketed, with false documents of attribution of origin issued with the blessings of the Turkish administration. A secret protocol released by the Kurdish agency Firat (ANF) suggests that almost a quarter of the income obtained through the commercialization of that product – some 19 million euros – would be used to pay the mercenaries of Recep Tayipp Erdogan. 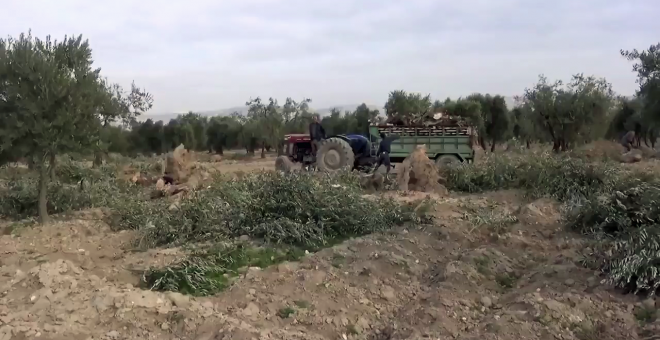 As a result of the publication of this information, dozens of media from all over the planet -among them, a good number of Arab newspapers- echoed the facts, providing new data that led us to confirm that, in In effect, Turkey had sold small consignments of oil obtained as war booty to countries such as Cyprus or Saudi Arabia, after raging against the civilian population. To this last country they have arrived tins of oil of Afrin of first quality, under the name of Barakat Al Ghouta, as it reveals an Yazidi media in a video interview. According to EZDINA’s research, Syrian olives are transported to be milled in Turkey (see the translation of the video included in the information).

Even the Turkish producers themselves and some opposition parties are oposing to this looting. They fear that the entry into their market of that stolen production has a negative influence on their national market, by pulling the prices down. What the Executive of Erdogan tries to avoid is that part of the income provided by the “green gold” will end up in the hands of the Syrian Kurds, whom he treats as a subsidiary of the PKK, and whom he obsessively refers to as terrorists, although they have been the main land allies of the Americans in the fight against the Islamic State.

The information disclosed by Público has even been confirmed by a Kemalist deputy from the People’s Republican Party (CHP), Orhan Saribal, who stated that it is strictly true that around 50,000 tons of Syrian olive oil from Afrin have been transported to Turkey for commercialization in the domestic market and in third countries. According to this parliamentarian, Afrin oil travels crudely in sixteen and twenty kilo cans to Turkey, where it is labeled and packed. Presumably, there it could be mixed with other Turkish oils of similar quality and from the adjacent Syrian area or, eventually, it is processed in Hatay along with other olives. If so, its multivariety nature would still make it more difficult to detect the fraud, especially when it is the Turkish State itself that sponsors the scam.

According to an Afrin producer based in Spain, the type of olive tree that abounds most among the Kurds is often known as “Zeiti”. “In fact, it is often said that it is the one that provides the most performance. Its size is variable and its appearance, similar to that of “manzanilla”. Of course that depends on the terrain, the climate and the specific place where it is grown. The average production of each tree ranges between one hundred and two hundred kilos, in alternate years. There are five subtypes of this variety, whose quality and production is variable. Logically, the Kurdish peasants choose the best ones according to their preferences “.